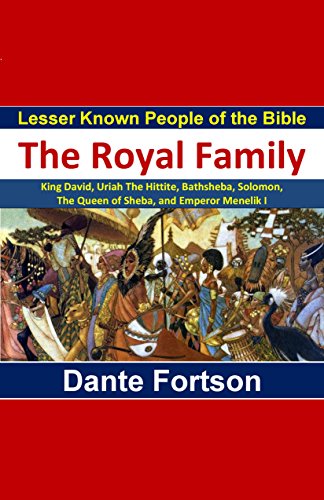 One of the most fascinating studies in the Bible is that of the lineage of the Messiah. Starting with Adam, God established the pat-tern of choosing the lineage of the youngest son from Seth all the way to David. Once the lineage of Christ is revealed, nothing but drama surrounds the reign of King David. It is through the story of David that we are introduced to several very key people:

+ Uriah: The mighty man that loyally served David, only to be betrayed and murdered to cover up an adulterous affair.
+ Bathsheba: The woman that David murdered one of his own soldiers to have, and the mother of King Solomon.
+ Solomon: The son of King David and Bathsheba, who would later become king himself, and known as the wisest man to ever live.
+ The Queen of Sheba: The queen that traveled from Ethiopia to see the legends of Solomon with her own eyes.
+ Menelik I: According to Ethiopian history, he is the son of Solomon and The Queen of Sheba. It is also believed that it is he that took the ark to Ethiopia, where many believe it remains to this very day.

Throughout this study, we’re going to explore each of these people, make connections we may never have made before, drop our preconceived notions, and we’ll let the evidence determine our beliefs.